All UK workers are entitled to join a trade union. The Trades Union Congress (TUC), to which the majority of UK trade unions are affiliated, provides an information service which directs workers interested in union membership to the most appropriate trade union for their role/sector. 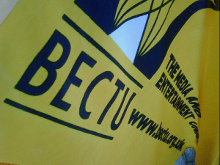 Flying the flag for workers in media and entertainment.

BECTU represents the media and entertainment sector. Staff working for a host of  employers including the BBC, ITV, C4, Scottish TV, Ulster TV, regional theatres, West End theatres, the National Theatre, Royal Opera House, RSC, ENO, Virgin Media, and Odeon cinemas come together in BECTU. Freelancers working across all areas of production and live events are also represented by the union. This is not a comprehensive list.

Formal recognition agreements confirm the union's right to negotiate on a range of issues including pay, pensions and other key terms and conditions. Freelance members also benefit from a number of agreements covering film and independent production in all parts of the UK.

Who does BECTU represent?

BECTU's members work in all roles - camera, lighting, producer, director, hair and make-up, editor, researcher, writer, broadcast technician, engineer, lawyer, production assistant, usher, stagehand, box office, manager, floor manager,  ... the list goes on.  In short, BECTU looks after technical, production and support workers as distinct from actors who are looked after by Actors' Equity and musicians who are represented by the Musicians' Union. The only performance group represented by BECTU are background artistes in London and the South East.

BECTU, which is a sector of Prospect, the union for professionals, is growing. The creative sectors are increasingly important to the UK economy and BECTU's long-established support for workers, across  a range of skillsets, is leading to growth. The union's officials and reps are responsive to the needs of the developing workforce.

The union's services covering insurance, copyright, script registration and debt chasing are an essential support. Freelance members across the country work together to devise recommended rates for their skills area. Eligible members can organise a press pass through BECTU.

Crewbus is the union's freelance directory.

BECTU's promotion of quality training and investment by employers is well recognised; the union provides a range of training opportunities not only for its local representatives but also to assist members generally to enhance their employment prospects. Vocational training is provided at low-cost or in some cases free of charge.

In addition to collective and individual support in the workplace, all members have access to expert advice on legal matters and tax issues. The union has also sourced a stakeholder pension for the benefit of freelance members.